The second day of LotusMUN’21- “Redefining the Norm”, began with supreme verve and vigour to find feasible solutions for the problems at hand. The world leaders at the United Nations General Assembly wrote working papers to deeply analyse the issue of intolerance and provide apt solutions for the same, while delegates in the United Nations Commission for the Status of Women decided to reach a joint conclusion over the agenda given.

The United Nations Security Council convened to find ways of restoring peace in Myanmar after the coup d'état of 1st February 2021. The Indian politicians in Lok Sabha discussed the future of India’s economy post the covid pandemic. Meanwhile, in Indian War Cabinet, government officials took diplomatic and military action against the PLA around the McMahon Line. Furthermore, editors-in chief of EU countries congregated in European Commission on Ethical Journalism and Reporting, and framed a mandate for the release of sensitive information regarding governance, trade ties and military.

In the Union of European Football Association, football clubs agreed to transfer funds from the men’s football clubs to the women’s; meanwhile, countries in the International Organisation of Securities Council, deliberated the implications of short selling and market manipulation through social media.

The Valedictory ceremony echoed the sentiments of our beloved Director Principal, Ms. Anita Malhotra, who congratulated every delegate for their extensive research, significant effort and immense ability, and affirmed that Model United Nations is an exercise in radical empathy and it is imperative for the leaders of tomorrow to raise awareness towards issues concerning humanity.

Ms. Malhotra humbly stated that the school will share a letter with the Prime Minister Office to brief him on the commendable initiative of our leaders of tomorrow, their devotedness and avidity that is unparalleled. She also mentioned that the school would write to the Head Office of UN notifying them about the same.

The special guest of the day, eminent lawyer, Ms. Ameeta Duggal acknowledged the brilliance of every delegate. She stated that the world today is divided, and by arguing on behalf of the countries that face shortage of resources or lack cultural motivation or political will; we are heading towards acquiring a better sense of how to overcome this disparity.

Ms. Duggal wrapped up her thoughts by quoting our school moto, Arise, awake, and stop not till the goal is reached; and urged the students to don the hat of budding leaders, and resolve to adopt a unified approach towards making better policies that would mould the world into a place we would all like to live in.

MUN is certainly an exciting scholastic activity that rewards every participant with incomparable confidence and poise. It allows the delegate to be a confident debater who is affirmative yet maintains the grace of a good listener. The platform permits matchless deliberations that lead to providing solutions to the existing concerns across the globe. The covid pandemic has led us to redefine our policies and reframe our rule books, and that marked the essence of Lotus MUN’21.

The journey through LotusMUN’21- “Redefining the Norm”, metamorphosed every delegate to a promising leader, ready to take on the world. Delegates radiated confidence, pride, joy and a feeling of accomplishment. The event came to an end after two days of exhaustive deliberations; however, the journey of learning continues…….!

Heartiest congratulations to the WINNERS in the 2-days event: 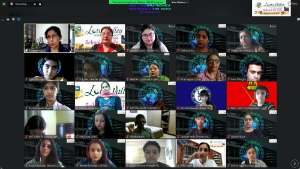